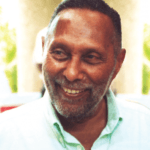 An activist and writer. Born in Jamaica but have lived mostly in Britain.